Facebook now has more than 1 billion users. That’s a lot. And most of us are aware the social networking site is the largest in the world. Facebook has seemingly proliferated nearly every crevice of the ‘interwebs.’ Websites are using Facebook widgets in place of the ‘traditional’ comment section, the Facebook share button sits next to nearly every blog post and most people check their Facebook news feed several times a day.

For many of us, Facebook is such a huge part of our lives that it can be hard to get away from the daily dose of friend updates, brand pages marketing their products and news about the site itself. I get made fun of for my constant social media consumption–I’m always on the hunt for articles spanning a wide array of topics just so I can share it across my networks. All this Facebook usage and consumption of updates from our online social networks can be rather taxing. Even I take a break from time-to-time. According to the infographic from onlinecollegecourses.com below, I’m not alone–61 percent of current Facebook users have taken a break from Facebook for one week or longer.

The infographic states several reasons why people feel the need to take a brief hiatus from Facebook. For me, it’s just nice to ‘unplug’ for a day or two just to clear my mind a bit. Take a look at the infographic below and let me know if you’ve taken a break from Facebook or if you plan to soon.

The WordPress.com stats helper monkeys prepared a 2012 annual report for this blog.

With voters heading to the polls this week this infographic is rather timely. I am lucky enough to not have to suffer through too many political ads because I don’t have a TV. However, social media is part of my job and my life in general so it’s impossible to escape political posts in my Facebook news feed or in my Twitter stream. Indeed, I follow Barack Obama on both Facebook and Twitter and hardly a day goes by where I miss out on a piece of propaganda turned out from his crack digital team. I’ll admit I didn’t watch a single second of the recent presidential debates, but I basically got the gist from all the memes and post-debate online chatter.

Take a look at the infographic below to see how social media has impacted this election so far. First, a few stats that jump out at me. For one, 9 out of 10 Senators and Representatives now have a Twitter account. Of course, these accounts are mostly being run by the campaign team or other staffers, but I think this still helps to emphasize the importance of social media in the overall strategy of politicians. Other stats that really jump out at me are based on the sheer volume of Tweets this year’s election has sparked. Barack Obama inspired over 52,000 tweets per second during the 2012 DNC–4 million tweets during his 39 minute speech. The first presidential debate even saw a quarter million mentions for “Big Bird.”

After you skim through the stats below, think about how social media has played a role in shaping your opinions. Would you be voting differently without social media? 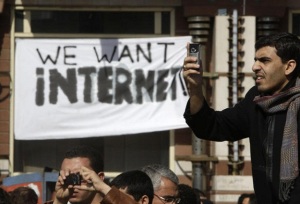 Another impressive infographic has come through my inbox and is definitely worth sharing. This one shows the true power of the Internet in bringing people together for social change. Information flows so fast these days that it can be easy to overlook or forget some of the major events powered by social media and Web broadcasting. The Internet as the public knows it is roughly two decades in and is as much a part of peoples’ lives as life itself. OK, that might be a bit dramatic, but you can definitely get a feel for how important the Internet is as a communication vehicle.

Some of the information in this graphic that really jumps out at me include the fact that a computer programmer in Pakistan tweeted about the Osama Bin Laden compound raid hours before the mainstream media reported it. More than 10 million Internet users signed an online petition opposing  the Internet censorship bill, SOPA, while another 3 million emails were sent to congress. The Internet is a true tool for social change and a vehicle for revolution. Check out the infographic below to see how the Internet plays a role in society:

There’s been a lot of chatter about cyberbullying lately and this new infographic from onlinecollege.org has some amazing stats to provide insight to how technology is affecting youth. I’ll let the infographic do most of the talking, however there are a few stats worth noting.

With girls aged 14-17 sending nearly 3,000 tweets per month, there is bound to be some negative conversations now and then. Kids are now growing up in an increasingly interconnected world where using mobile technology and online social networks is commonplace. As many would agree, a problem with online communication is that people can hide behind a persona and ‘bully’ others from a distance. Indeed, 7.5 million Facebook users are under age 13 and 81 percent of today’s youth say bullying online is easier to get away with than in person.

Please take a look at the infographic below and consider the teens you know in your life, or maybe you are one:

Another infographic filled with amazing facts about the Internet is making the rounds. I was contacted by one of the creators from onlineeducation.net a couple days ago and I have started to see it posted on other sites since then (PR Daily for one).

This is an interesting infographic as it attempts to paint a picture of what life would be like without the Internet oppose to simply pointing out some key stats. Alas, there are plenty of stats that jump out at me such as the Internet directly and indirectly employing over three million people in the U.S. alone and the Internet reducing the degrees of separation down to only 3.74 people. The infographic ends with the fact that most modern day revolutions are not only aided by the Internet, but are actually started with simple Twitter hashtags such as #occupy.

Take a look below. What jumps out at you?

And remember, sharing makes you smarter!

I saw this infographic on Ragan’s HR Communication a while back and found it to be quite fascinating. One of the original creators recently reached out to me to see if I would be willing to post it on my blog. The infographic is pretty cool so she didn’t have to twist my arm too much.

Some of the interesting takeaways from a social media standpoint include 532 million status updates everyday, 250 million photos uploaded to Facebook daily and 864,000 hours of video are uploaded to YouTube everyday. Take a look and see if any of the statements jump out at you.