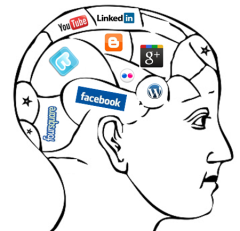 Another infographic has come through my inbox that is definitely worth sharing. The folks at PsychologyDegree.net have gathered some interesting studies regarding the psychology of spending time on social networking sites. The basic assertion is that users of social networking sites are essentially narcissistic in nature. Though I would disagree it is that black and white, the infographic below does point to some interesting stats and findings.

It may be hard to argue with a finding that 80 percent of social media posts are about the poster. However, I might argue the validity of such a broad finding. It would be interesting to see how various social media platforms vary in this area. Twitter, it would seem, would yield more posts about topics of the user’s interests, but not necessarily about the poster him/herself. If you were to take into account social bookmarking sites, posts about the actual user would be almost non existent. My guess is the study was done with Facebook as the primary subject. Maybe I’m being too critical.

The last section of the infographic states that “half of all users compare themselves to others when they view photos or status updates.” That’s just human nature I suppose. What do you think? Are we obsessed with social media or are we obsessed with ourselves?

I'm a social media specialist and a graduate of St. Cloud State University with a Masters Degree in Mass Communications with emphasis in PR and Advertising. I did my undergraduate work at Northwestern Oklahoma State University, majoring in the same field. My interests include social media, marketing, photography, running, and traveling. View all posts by eric_wheeler

3 thoughts on “#Infographic: The Psychology of Social Networking Sites”